For us romance fans, it’s been the most anticipated movie in… ever! We’ve hung on every meme, still, cast interview and behind-the-scenes shot we could get our grubby little hands on. We awaited the reveal of this precious cast with bated breath. And last night, I was super excited to see Fifty Shades of Grey, the movie, for the first time, with my group of girlfriends and our token gay.

And I was so disappointed.

As the opening credits rolled, I admit, I emitted a super-girly squeal and braced myself for the heartache and emotional whiplash I experienced when I first read the books, a few years ago, knowing that the ending was going to gut me, but pacified with the knowledge that two more movies would follow, to heal my heartbreak.

When Jamie Dornan and Dakota Johnson were cast as Christian and Ana, I was sceptical. But they were never going to please everybody, right? And they’re the professionals. So, we should probably reserve judgement and trust them to do these beloved characters justice. And trust them I did.

Well, I stand happily corrected where Anastasia is concerned. Dakota was an absolutely fantastic Ana, and for me, she completely carried this film. She was funny, awkward, gorgeous, ordinary, strong, vulnerable… She really made me love Ana, and seeing as Ana has certainly never been my favourite heroine, I was incredibly impressed with her ability to bring a likeability and backbone to this character, that was seriously lacking in the book. She’s a great example of somebody really bringing a character to life and giving them an identity.

However, as I first feared, I felt Jamie was nowhere near mean, moody, intimidating or charismatic enough to carry off a convincing Christian Grey. For starers, despite his quite spectacular jaw line and admittedly pretty face, he wasn’t physically big and imposing enough for me. He’s a very good looking man, granted. But I wanted raw male, I wanted an undeniably masculine hero that just exudes irresistible testosterone and everything manly. He’s our ultimate book boyfriend and he has been brought to life. I wanted him to make my heart flutter and my breath catch. The reality was so far from my expectations that I could cry. I wanted to feel like he could throw me around a room. Looking at him, I think he might slip a disc if he tried to pick me up.
And secondly, his acting skills left me feeling utterly disconnected and, well… flat. I don’t know whether it was because he is actually Irish and has to ‘do’ the American accent, but I felt that every time he spoke, it was so forced and unnatural. I know CG is supposed to be pretty formal and closed-off, but it was more than that. There’s a big difference between brooding and vacant.
I also noticed that his posture was often stiff and a little robotic, whereas Ana specifically describes Christian as moving fluidly and being beautifully comfortable in his own skin, moving with a grace you wouldn’t expect from such a big man. Jamie could not have been further from this description.

I loved the contract negotiation scene. The banter, the flirting, Dakota’s fabulous portrayal of Ana’s amusement. It was brilliant… until Jamie brought you back down to earth, with a bump, with his sub-par acting and mechanical delivery of his supposedly sexy script.  And I don’t know whether that was Jamie’s fault, or if even the greatest of actors might have struggled to voice those lines without them sounding utterly ridiculous. In the book, it worked. On screen, for whatever reason… not so much.

One plus point goes to the sex scenes. I was intrigued to see whether the sex would come across as tasteful and emotive, or crass and tacky. And I do think it was done well. My only complaint is that, as lovely as she is, we got to see a lot of naked Dakota (yes, full frontals, big bush and all) and not nearly enough lingering on naked Jamie. This movie is primarily for women, so I’m confused as to why we were privy to so much Ana flesh and not so much Jamie flesh. I mean, yes, we got fleeting glimpses. There was a nice bit of ass muscle flexing, some great pulling-shirt-over-head shots, some very low camera shots, at the waistband of those infamous red room jeans and even a flash of ‘root’. Lol! But still, far too many sensual camera-pans across Dakota’s naked body, a lot of tit shots and nowhere near enough sweaty, Christian Grey!

AND I know that adverts are designed to cater to the target audience of the film you are about to see, but can I just say that showing the trailer for Magic Mike, in which Channing Tatum has made a commendable (and very much appreciated) effort to bring us a pair of guns worthy of any gun show grand finale and a cut, tanned body, seemingly carved by the hands of God, did nothing but put Jamie’s body honing efforts to shame. Magic Mike standing on stage in nothing but low slung jeans made my mouth water and my eyes bug. Jamie standing in his red room in nothing but low slung jeans… Meh.
Mike; now there’s a man who could throw me around a room!! Who even cares about the plot of that movie?! 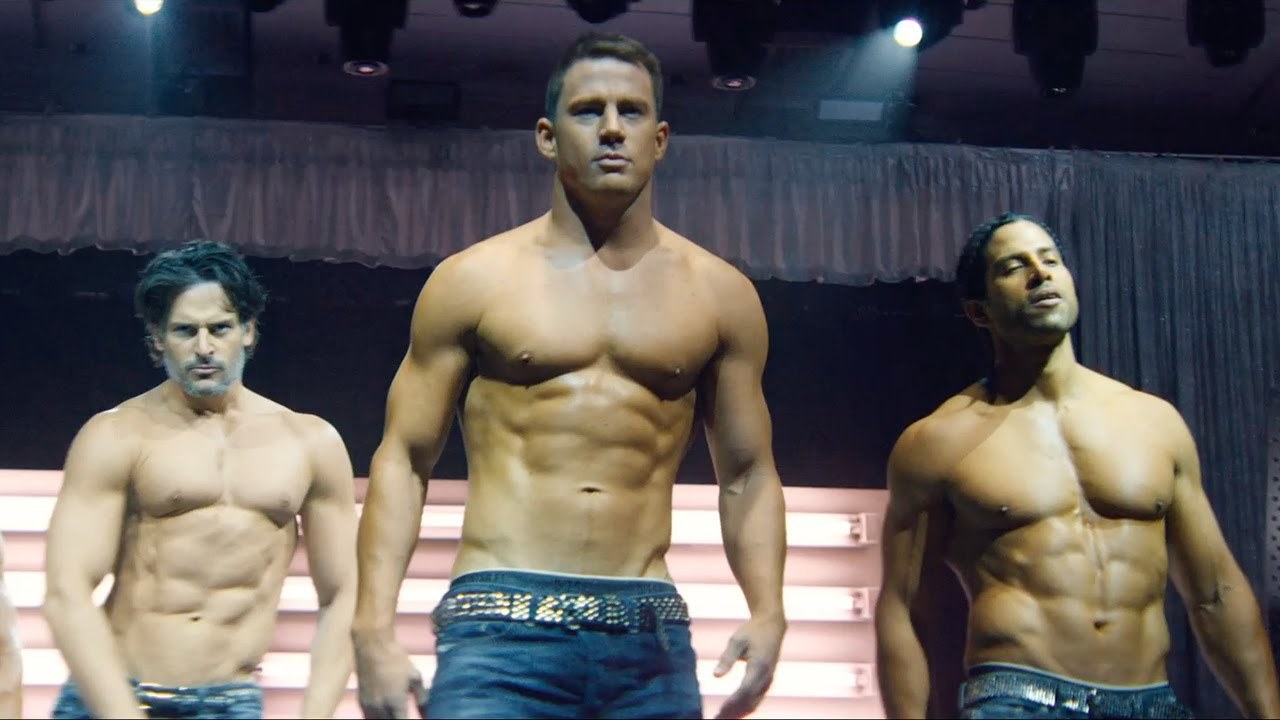 But, I digress… So, lastly, the actual Fifty Shades movie as a whole just did not work for me. It fell a long way short of my expectations. There was so much that wasn’t included, and whilst I appreciate that they had to condense it, in order to make an acceptable length movie, I felt that this really, really affected the story. I didn’t feel one single ounce of emotion for these characters, whereas in the book I was in tears and my heart was pounding at the end. In fact, I think my heart fell asleep half way through this film.

Added to this, I felt that there was so much that I loved from the book that just didn’t translate very well at all. I can’t decide whether it was the poor delivery or that hearing some of my formally favourite lines said aloud was unexpectedly cringe-inducing, but either way, cringe I did! A lot.

The movie certainly highlighted the total ridiculousness of this story, that I managed to push aside and ignore whilst reading the book, seeing as it did nothing to justify it’s over the top plot. It did nothing to explain Christian’s unlikely fortune at such a young age, or his realistically unacceptable control issues. It didn’t attempt any hint at character development and it didn’t even try to make sense of Ana’s decision to submit to Christian’s every unreasonable whim. It did, however, do a great job of making me feel foolish for believing in this story in the first place and for falling in love with Book Christian. And nobody wants a movie to make them feel stupid. I know that when my other half sees this film he’s going to say ‘Seriously? That is the story you love so much?’ and to be honest, I don’t think I’ll be able to defend it. Yes, Christian is unrealistically and seemingly undeservedly rich. Yes, he is embarrassingly controlling, stalkerish and interfering. No, that is not my idea of an ideal man. What was I thinking?? Well, I was thinking that the book made the effort to justify all of this and didn’t make me feel like a total idiot for falling for this bossy, arrogant tosser! You’d be forgiven for almost feeling that the movie is secretly mocking us easily wooed, fluffy, gullible, romance junkies.

I felt that the only areas of this movie that had had any emotion injected into them were the sex scenes. But the rest just seemed like a robotic, step-by-step walk-through of the plot, void of the overwhelming feeling and passion that consumed me when I read the book.

However, obviously I will go and see the next two films. Obviously! 😉

This entry was posted in Movie Review. Bookmark the permalink.

10 Responses to My Fifty Shades of Grey Movie Review